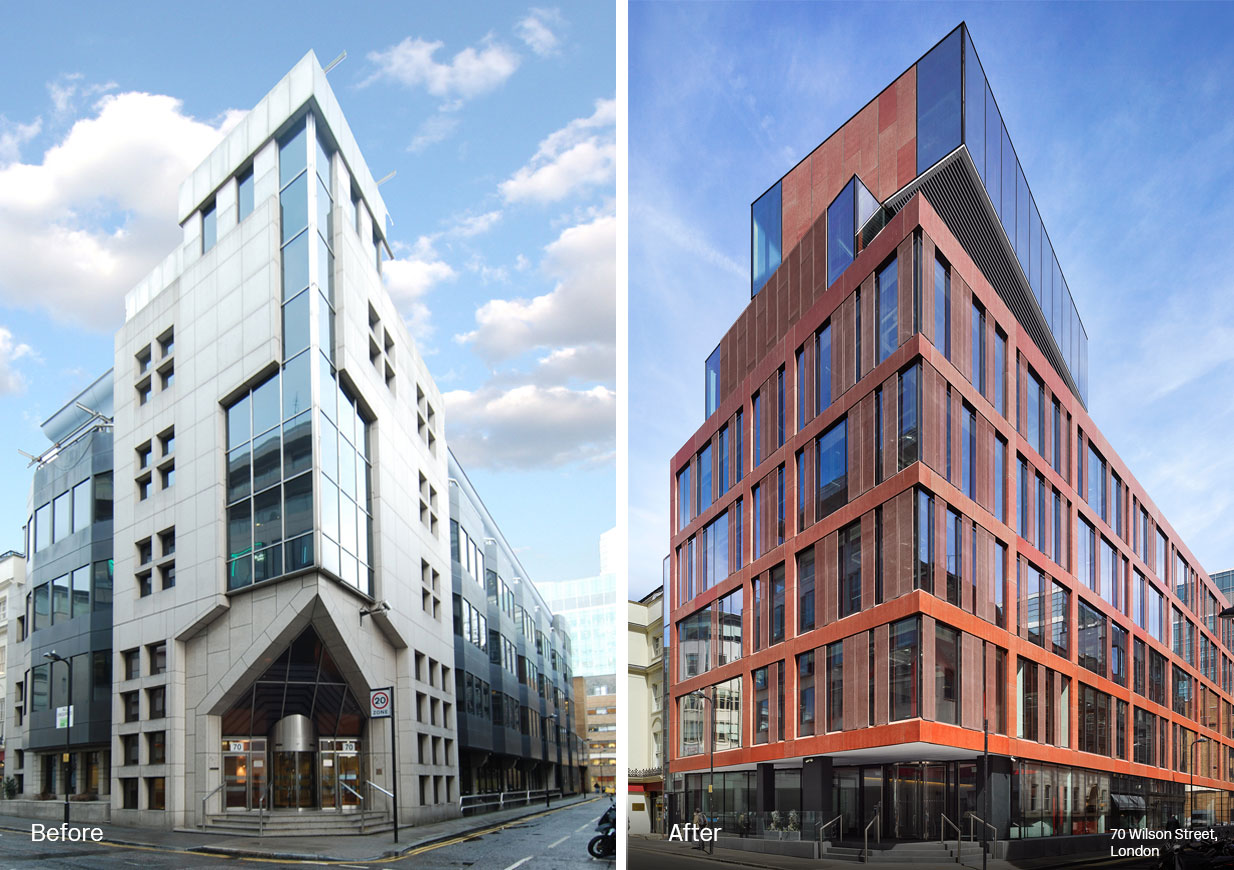 This week saw #retrofit first move into the mainstream with a BBC article on the Architects’ Journal’s Retrofirst campaign. The campaign is something which we support wholeheartedly and the wider we can spread this message the better. Sustainability needs to be at the top of our agenda in the design of our urban realm and this can only help to accelerate the construction industry’s move towards a circular economy.

With new technologies and advances in design and construction techniques, the retrofitting of a building has become a viable and credible alternative to new build. Now a retrofitted existing building can match the performance, and in embodied carbon terms vastly outdo the credentials, of a new build.

Through our projects, such as 70 Wilson Street and the IBM building we’ve seen that clients can save around a third of the embodied carbon through retrofit, compared to a new build approach. This equates to an estimated embodied carbon payback for a retrofitted facade of around five years.

A key aspect of RetroFirst is the need to improve the environmental performance of our existing building stock. The facade is an essential asset to passively achieve energy efficiency for a building. Facades can be responsible for between 13% and 21% of embodied carbon on a new build. This rises to a much higher proportion on a retrofit project. However, the benefits in reducing operational carbon are significant.

As part of our winning entry for the Metals in Construction competition with Wilkinson Eyre Architects for the retrofit of 63 Madison Avenue in New York, we estimated that the carbon return period of the upgraded facade on this refurbished building would be around five years. This is much lower than its 25-year expected service life.

The AJ RetroFirst initiative focusses on three policy-based demands on Tax, Policy and Procurement to remove barriers to retrofitting buildings. But we can still make a difference now with good engineering to understand the complexities of the existing structure and the best techniques to modify it.

In a future piece, Associate Director Ben Lewis will talk about this as part of our work to retrofit the London Road building for London South Bank University. Here we have engineered a new facade to improve building performance and carbon fibre strengthening of the concrete structure.

We absolutely support the AJ’s RetroFirst campaign. Our experience in retrofit has already demonstrated to us how this can bring to contribute to net zero energy buildings.