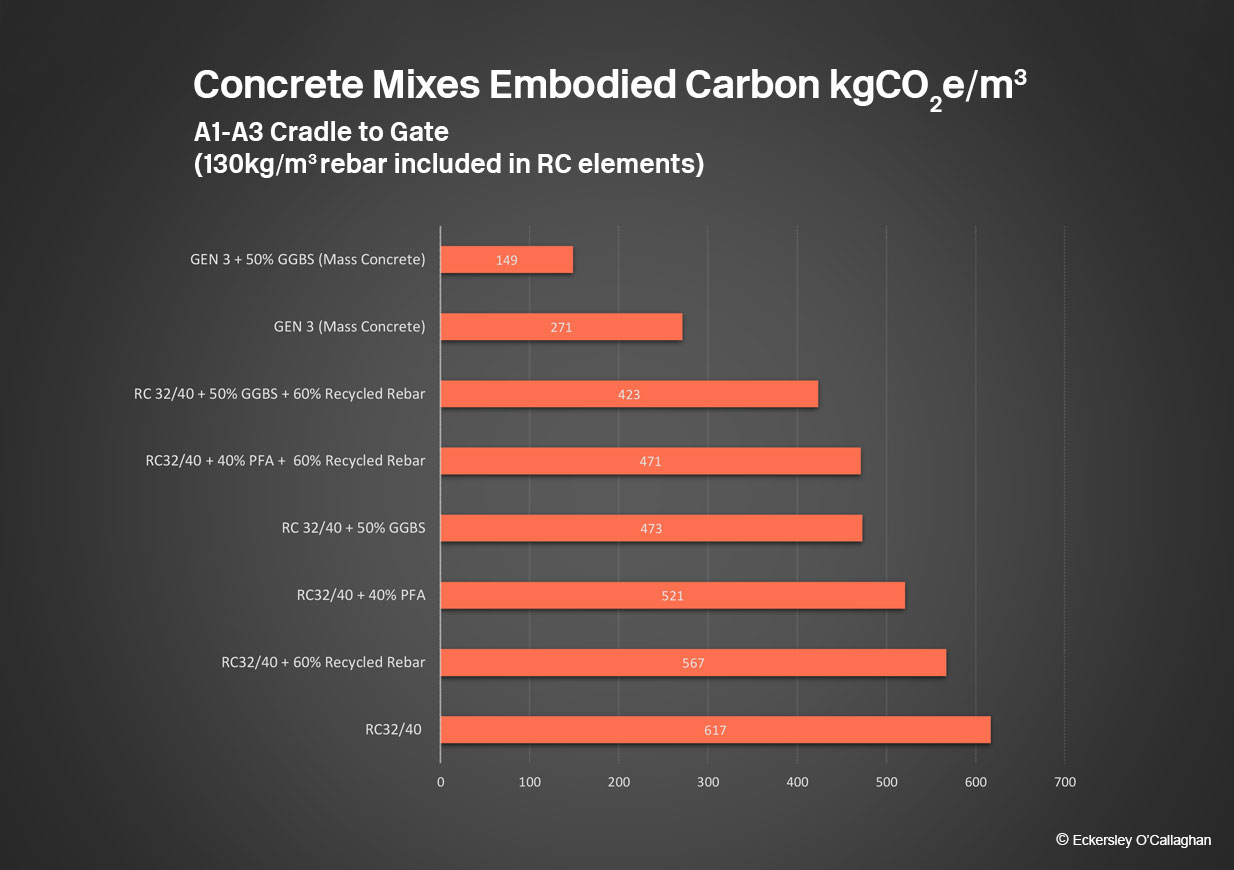 While the carbon conscience among us are moving to the available alternative materials to lower the embodied carbon in our superstructures, carbon intensive concrete remains the only real option for foundations. In the latest of our climate Friday talks, Structures Director Toby Ronalds explains how, despite the lack of an alternative, steps can be taken to reduce the major impact it is having on the embodied carbon of our buildings.

“As the embodied carbon of buildings becomes increasingly important, concrete is frequently cited as one of the materials to avoid. The truth is that unreinforced concrete is better than steel and brick on a volume basis, it is worse than timber, but used on far greater volume than all other three.

The argument to use less concrete and use lower embodied carbon materials instead is valid in part, but our dependence on concrete as a building material will mean that it will continue as a key component of construction for some time. Today, we have the capability to replace most superstructures with timber, but we do not currently have a viable replacement to concrete for sub-structure construction and foundations. This means we need to understand the different types of concrete better and to work on our specifications to make embodied carbon savings.

The good news is that many of these savings can be made with simple specification switches that have a relatively minor impact on design, cost or construction.

As structural engineers we don’t see concrete as a single material but rather as a range of materials, made with different mixtures and with differing properties. While the relative proportions of sand, gravels and water has little effect on the overall embodied carbon content, the amount and type of cementitious material is important. High strength, fast curing mixes have higher cement contents resulting in high embodied carbon values, mixes with high proportions of cement replacement materials, GGBS or PFA, have markedly lower values.

In fact ‘concrete’ is frequently used when ‘reinforced concrete’ would be a more accurate term – a structural system using concrete in combination with steel reinforcing bars. In reinforced concrete elements, the proportion of reinforcement differs depending on the structural loads it needs to resist and can vary considerably from no reinforcement in ‘mass concrete’ up to values of around 300 kg/m3. This changes the embodied carbon of the material accordingly.

To help illustrate this, the graph above shows the embodied carbon differences of some common mass and reinforced concretes (taking data from the Inventory of Carbon and Energy (ICE)). In highly reinforced elements the % embodied carbon savings in using cement replacement materials diminishes but the real CO2 saving remains. There are clear hidden savings to be made in careful specification of mass concrete elements in foundations – an area not often given lengthy consideration in the design process, and in reducing the strength on concrete in elements such as walls with lower stresses.

There are also big embodied carbon savings to be made in using alternative structural arrangements – waffles rather than flat slabs etc but that is the subject of another Climate Friday post.”